Limiting Beliefs – What They Do And How To Fix Them

Are you ready for an idea that will transform your life?

Okay – it’s easier to let go of your limiting beliefs than it is to hold on to them.

That’s not what most of us are taught in personal development, but in a moment you’ll see how easily you can let them go and be free of them forever.

Limiting beliefs are the little voices that convince you that you can’t be/do/have something.

How Do You Know You Hold Limiting Beliefs?

Throughout your lifetime, you’ve built up beliefs about the world. What’s really fascinating is the physical effect of these beliefs. The more you reinforce them, the more pronounced the effect on your body.

If you slouch; if you tend to look at the ground when you walk; if you carry extra weight; if you repeatedly have problems with a specific body part – then your body is exhibiting the physical manifestation of limiting beliefs surrounding your self-image.

Another clue to limiting beliefs is persistent agitation, queasiness, anxiety, depression, indecision, quick temper and other emotional issues. Another important clue is the way you talk about yourself, to yourself, to other people and about the world. Really pay attention to the tone of your speech.

Are you mostly negative?

Do you complain and blame?

Happy, confident people walk tall, look everyone in the eye, enjoy generally good health, and their emotions are mellow and steady. They speak positively and smile much more often than people who are stuck in their limiting beliefs.

Are you struggling in your relationship?

If you experience any struggle, it points to self-limiting beliefs in that area! The same goes for feelings of stagnation, hopelessness, boredom or lack of enthusiasm. You would not be feeling those if your self-image was good and you weren’t being held back by your beliefs.

Now that you know what to look for – any problems, struggles or negative behaviors in health, wealth, relationships or career – you can begin releasing the limiting beliefs that cause these problems.

No matter the situation, you can evaluate your situation; your emotions; and your physical feelings and then work backward to identify the thoughts that generated them.

Think back to some accomplishment you’re proud of. In particular be aware of your emotions and your physical response to that memory. When you were successful, you felt good! “I can” feels much better than “I can’t”.

Now think about a current goal or dream.

How do you feel when you think about it?

Chances are, your first mental/emotional/physical reaction is positive. It FEELS GOOD, doesn’t it, to be thinking about your awesome goal?

And then, depending on how severe your limiting beliefs are, you begin feeling worse: you may get nauseous, or feel a tightness in your body, sweaty palms, etc. That’s your subconscious mind trying to convince you that what you are dreaming about is dangerous and you should not do it! That’s how you know your limiting beliefs are firing up to get you to stay put where you are!

When you get that icky “I can’t” feeling, understand that it’s just the reverse side of a wonderful “I can” feeling. Use your imagination every time you think you can’t.

Do this quickly, any time a negative thought comes up – imagine what can go right; what you CAN do; what you want. You have a choice! You don’t have to allow the negativity to dominate. Be forceful. Make yourself think positively!

If you feel any physical discomfort or experience unpleasant emotions, use them as clues to take note of what you were thinking. And then switch on your imagination and visualize what you want. Hold on to that good feeling – because the positive visualization FEELS good – for as long as you can.

With repetition, your good feelings will intensify, the neural connections will strengthen, and your body will reflect just how awesome success really feels!

The next step of the release process happens later, when you have time to meditate or think about what happened. This is the time to ask yourself why you believe that you can’t.

Did somebody, back when you were young, call you stupid?

Did they make fun of you?

Did they tell you that only certain people could do (x)?

Depending on the person, your frame of mind and how you interpreted the statement, you unconsciously chose to believe the statement. That’s how self-limiting beliefs are born and take hold. If you believe a statement that somebody says to or about you, then you unconsciously start taking actions to prove that what they said was true! And what they said becomes a self-fulfilling prophecy!

Now that you have identified the thoughts that make you feel physically unwell, and you’ve dug into your past to discover why you feel that way about yourself, you can release the belief. It does not belong to you. You picked it up and adopted it, but you can just as easily put it down.

Release a belief by committing to about a month or so of intense and self-reprogramming using your imagination and self-talk. The Love or Above Toolkit will help you access your intuition and communicate with your Higher Self. This will give you the big picture, which is the true reality – that you are unlimited and unbound by other people’s limitations!

Use FEELING GOOD as your guidepost. It’s natural to want to feel good, so make feeling good your commitment. Immediately return to that state of feeling good when you feel negativity, and you’ll quickly reprogram those limiting beliefs!

The Power of ‘I’m Enough’

Self doubt is the lack of belief in your own talents and abilities. But it goes much further and deeper than this.

Self doubt, at its core, is an expression of inadequacy.

Self doubt can manifest in a number of ways, but it often stems from deeply held subconscious beliefs imprinted from childhood trauma.

The real question is: how do we get rid of it?

Legendary transformational hypnotherapist, Marisa Peer, shares three powerful words that have the ability to challenge and erase self doubt.

These words have literally changed the lives of tens of thousands of the Mindvalley tribe.

If you want to Transform self-doubt into self-confidence, then join this Free Masterclass with UK’s #1 Therapist, Marisa Peer, where you’ll learn:

✅ Expand your Vision for yourself (stop settling) as Marisa explains how to lead an uncompromised life — a life where you enjoy success, abundance and freedom.

✅ Understand the REAL key to breakthrough in any — ANY — area of your life. 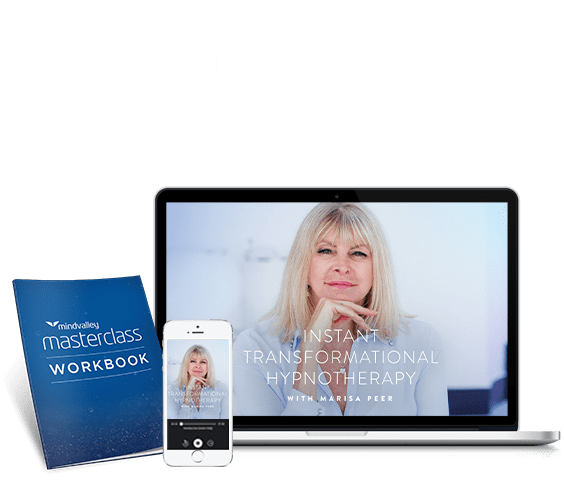 Mindvalley is creating a global school that delivers transformational education for all ages. Powered by community. Fueled by fun. We are dedicated to ensuring that humans live happier, healthier, and more fulfilled lives by plugging in the gaps that conventional education failed to teach us. We do this by organising real-world events around the world and producing world-class quality programmes in several areas of transformation, including mind, body, and performance.

How You Can Consciously Engineer Your Life

Relieve Your Fears With Meditation For Anxiety