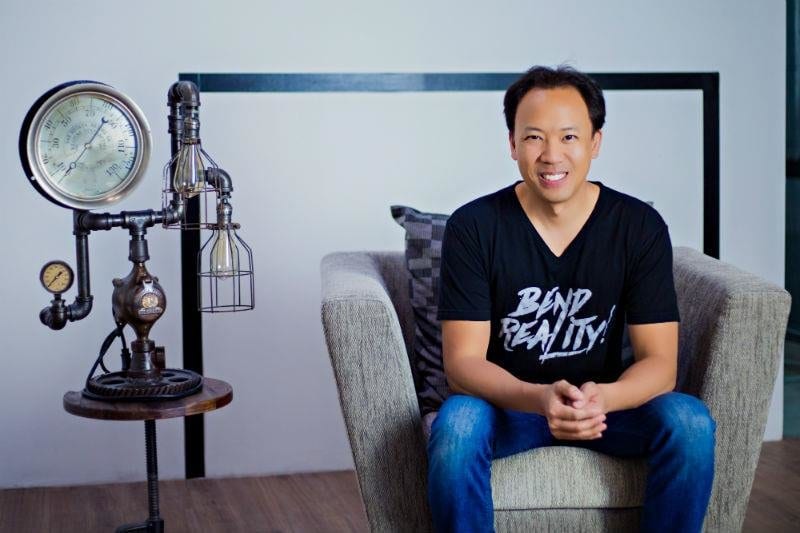 Known as the ‘boy with the broken brain,’ Jim Kwik defied all odds to train his brain to heal. Here’s Jim’s story and how he’s creating superheroes.

Jim Kwik used to be the ‘boy with the broken brain.’ After an accident at just 5 years old, he was left with serious head injuries. Now, he’s helping thousands of people transcend their limitations and unleash their superhero potential by revealing the biggest lie we believe about our brains.

From ‘Broken Brain’ to Super Brain

As a child, Jim Kwik would ride his bicycle around town in search of a superhero training site. He had read about it in his comic books. Supposedly, the school for his favorite superheroes was located in his hometown of Westchester, New York: the school for X-Men.

The X-Men were his favorite superheroes because he could relate to them. Just like him, they also didn’t ‘fit in.’

And most of us can remember what it’s like to feel like an outsider — but it doesn’t help when your teacher points out how you’re different from the other children in school. Jim remembers that,

At the age of 9, a teacher identified me as ‘the boy with the broken brain.

His teacher was referring to the serious learning challenges Jim had developed after his head was injured in an accident.

He had very poor focus, he didn’t understand things the way everybody else did, and teachers would have to repeat themselves 3, 4, 5 times. Eventually, Jim would just nod his head in agreement and pretend to understand to appease the teacher.

Now, he knows the most advanced techniques to learn anything, remember any name, or recall any number. And he trains world-class entrepreneurs, Fortune 500 billionaires, past presidents, and superstars on how to improve brain performance. He’s worked with the likes of Jim Carrey, Elon Musk, and Will Smith to accelerate their learning and improve their memory.

So how did he make the switch?

“My inspiration was my desperation,” Jim says. “I was lucky enough to get into college at the age of 18. I thought freshmen could have a fresh start. I thought, maybe I could get better grades in college.“

But he did worse. He started to lag behind in college, with piles of unread books on his desk and the thought, “I can’t keep up,” running through his mind.

He didn’t eat. He didn’t sleep. He didn’t take care of himself. After a while, he was down to 117 pounds. One night after intense studying, he passed out and fell down a flight of stairs. “I hit my head really bad. Again.” He woke up two days later in a hospital ward with a second head injury. “I thought I had died.“

Soon after he woke up, a nurse came in with a mug of warm tea. “It had a picture of Albert Einstein on it. The opposite of what it felt like in that moment.” When he grasped the mug, he was able to read the quote: “The same level of thinking that created your problem won’t solve your problem.“

Which caused him to reflect, for the first time, on a puzzle he needed to solve. “I asked myself one important question: What problem am I facing?“

“Well,” he answered himself, “I have a very slow brain.“

And so the next sensible question seemed to be, “how do I make it a better brain, a super brain?“

He searched for the answers at school, the place we usually seek to learn. He looked through hundreds of classes on the course bulletin for the next semester. “But they were all classes on what to learn, not how to learn.” History, Spanish, English, Maths, Science — those were all there. But there were zero classes on how to learn better.

Jim realized he’d have to self-study. He studied anything he could get his hands on the theories behind adult learning and multiple intelligences, the patterns of memory, the tricks behind speed reading, and more. Sixty days later…

A light went off. I just started to understand things for the first time. I started to absorb information. It’s like I had just activated my super brain. But why did I have to suffer all of these years? Why don’t they teach us this in school?

If no one else was teaching how to learn faster and better, then Jim would teach it himself. He would create his very own “superhero school,” where he could help people struggling to break through their limitations and unleash their genius.

How many of us exercise our brains? Like any other muscle, the brain needs to be trained and maintained. Otherwise, you’re not maximizing its potential. (Just ask Will Smith what two exercises he does every day to optimize his performance.)

It’s more important than ever, says Jim, when dealing with the flood of changes in the 21st Century. “The only thing that’s absolutely predictable is change. They say that the average person in today’s age is going to have 10–14 different careers because the world is changing so quickly.“

That’s why it’s Jim’s goal is to help people unlock at least 90% of their brain’s potential.

That’s why we created the Superbrain Quest. Because how do you adapt, and rethink, and retool, and outpace that? The only way, in my estimation, is your ability to learn faster.

According to Eric Schmidt, the Chairman of Google, all of the information humanity has created from day zero to the year 2003 is created every two days online.

“But your brain doesn’t come with an owner’s manual. Everything else that you buy comes with instructions, except your brain.” And, unfortunately, schools don’t really provide us with textbooks with this information on how to optimize the wealth-filled asset between our ears. “Instead, we’re drowning in information but starving for real wisdom,” Jim says.

He believes that “we live in an age of electric cars and spaceships going to Mars, but our vehicle of choice when it comes to learning is horse and buggy.” Most people have to repeat or re-read things tens of times before they can actually absorb the information. “That’s like typing with two fingers, as opposed to ten. But these things can be trained.“

Imagine that by understanding how the brain works, you could double your efficiency and save just 1 hour a day. You’d get 9 weeks back every single year.

But it’s not just our antiquated learning methods and the dizzying speed of information that we have to be wary of — it’s also our belief systems. The invisible gears of our minds either propel us forward or rust us in place. “A lot of people have been beaten down. Their environment — the media, marketing, family — has taught them that they’re not enough. So their belief in themselves, their belief in their potential, has taken a hit.” That’s why Jim believes,

No matter how difficult times get, Jim says, it’ll reveal more of who we really are.

That’s why superheroes have a special place for Jim: We can all see ourselves making that same hero journey in our own lives.

Jim got his opportunity to work with superheroes after giving corporate training at 20th Century Fox. The Chairman thanked him by giving Jim a personal tour of the Fox Lab. There, Jim saw a poster of Wolverine. “I lit up,” Jim recounts, “and the Chairman saw it. I tell him that every weekend, I used to ride around my neighborhood as a little kid, trying to find the school, because I wanted to run away from home and go to this superhero school with the mutants. Because I wanted to find my superpowers.“

The next morning, the Chairman picked Jim up at the hotel and put him on a private plane — with the entire cast of the X-Men.

Jim sat between Halle Berry and Jennifer Lawrence, next to Hugh Jackman and Patrick Stewart, on the plane to Comic-Con. The week after, Jim trained the cast of the X-Men to speed-read scripts, stay focused on set, and memorize their lines quicker and better. “But the best part is when I get home. There’s a package waiting for me. It’s the size of a T.V. I open it, and it’s this photograph of me and the entire cast of the X-Men.“

And there’s a note inside from the Chairman:

Jim, thank you so much for sharing your “superpowers” with all of us. I know that since you were a child, you’ve been looking for your superhero school. Here’s your class photo.

It turns out that by creating his very own superhero school, he attracted the one he had been searching for his whole life.