How to Create a Fast Metabolism With Your Diet
Body

How to Create a Fast Metabolism With Your Diet 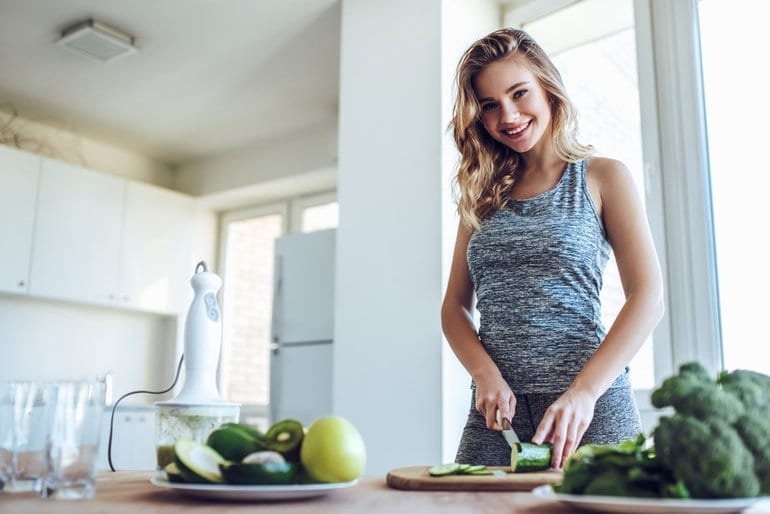 Whether you’ve got a naturally slow metabolism or you’ve hit a plateau at the gym. There are many ways to hack your body to start having a fast metabolism.

It can be frustrating having to watch what you eat just because you don’t have a fast metabolism.

Perhaps you have a friend who gorges down junk food on a regular basis without putting on a pound, while you struggle to lose weight even while sticking to a healthy diet.

Your metabolism plays a huge role when it comes to weight loss and how easy you find it.

Many people think they’re either blessed with a fast metabolism or they’re not – and that there’s nothing they can do to change this.

But that’s not true.

The truth is: it’s possible to increase your metabolism, through simple changes to your diet and daily habits.

This guide will explain how metabolism works, what affects its speed and what you can do to help increase it.

Metabolism Meaning: What Is It and How Does It Work?

Metabolism is the process of turning calories from food into energy that powers each of your cells. This process takes place throughout our body and keeps all of our cells working properly.

Your food is broken down so it can be easily digested and the nutrients can go where they are needed.

This is one of the main reasons that scientists argue that all weight loss plans should be primarily diet-focused.

Long before exercising, you want to make sure your body is properly hydrated and properly nourished.

What happens if you have a fast metabolism?

The speed at which this process takes place is called the basal metabolic rate. This speed varies among individuals and will change in your body over time.

If you have a low metabolism (often called a slow metabolism), the calories you consume are more likely to be stored as fat instead of used for energy.

If you have a fast metabolism (or high metabolism), more of the calories are used as energy. This prevents people from gaining excess fat and suffering from obesity-related health problems.

Of course, it is still possible to become overweight if you have a fast metabolism. In any case, if you supply the body with more calories than it needs, the excess will be converted into fat.

How do I measure my metabolism?

There are some basic online calculators that will estimate how many calories you’re likely to burn per day in a resting state, based on your height, weight, and age. However, these are just averages that don’t consider your lifestyle or diet at all.

Some more advanced tests are available to buy, but the most accurate measurements involve expensive equipment like metabolic chambers.

What Factors Create a Fast Metabolism?

Medical conditions such as an overactive thyroid gland can create a fast metabolism. Studies suggest that your metabolism is fastest while you’re young and slows down as you age.

These are factors outside our control. However, it is possible to speed up or slow down our metabolism through diet and exercise.

How to boost metabolism through exercise

You’ll boost your resting metabolic rate by building extra muscle. This is because your body will need extra energy to fuel this additional muscle and your metabolism adapts accordingly.

So, if you’re a regular at the gym, you’ll not only lose weight from the calories burned while lifting weights, but you’ll also benefit from a faster metabolism to support your new muscular frame.

Cardio exercise has been shown to have a positive impact on your metabolism too.

In fact, even basic activities such as standing, walking, fidgeting, or chewing gum have been shown to have positive effects. These activities are known as non-exercise activity thermogenesis (NEAT).

Nevertheless, it’s widely agreed that diet has a larger impact on your metabolism than exercise.

How to increase metabolism through diet

Foods that are rich in nutrients are tougher to break down because there is more for the body to use. When you consume these foods, your metabolism, therefore, has to work harder.

And if you regularly consume this type of food, you train your metabolism to always work this hard.

It works the other way round too. If you’re regularly consuming foods with little nutritional value, your body doesn’t have to work as hard to break it down. Eventually, it gets used to this and your metabolism slows. These types of foods also tend to cause bigger blood sugar spikes, which can lead to health problems such as diabetes.

The problem is: food manufacturers are packing an increasing amount of artificial ingredients that lack nutritional value, as these are cheaper to make. It means we have to work harder than ever to find metabolism-boosting foods.

Studies suggest that sugars are among the worst culprits for slowing metabolism, but it’s becoming increasingly difficult to find foods without sugars included. In fact, an estimated 70% of packaged food has some form of sugar within it.

Sugar triggers our appetite — and so manufacturers put it in everything.

If you’re looking to adopt a metabolism-boosting diet, a great start would be to avoid sugars and processed fats altogether.

Instead, target foods that are high in fiber, as these take a long time for the body to break down. Protein is a great choice too, as your body works harder to process this compared to carbohydrates and fats.

Lean meats are better than fatty meats for boosting metabolism and boosting muscle growth. An added bonus to consuming these foods is that they make you feel fuller for longer.

From there, you can begin to explore more specific foods that increase metabolism.

Some metabolism-boosting foods include:

Our guide on healthy snacks features some ideas for recipes that are packed with metabolism-boosting ingredients.

Crash diets might help you lose weight in the short term, but there are a few reasons why they rarely lead to sustainable weight loss.

For starters, they cause extreme metabolic slow-downs. When our body suffers from large calorific deficits, it responds by slowing metabolism – and reducing the number of calories burned through this process – as much as possible.

This rate of slowdown depends on your weight and the decrease in the calories being consumed. Obese people have been shown to have suffered metabolic slowdowns of up to 8% after adopting a normal diet.

Ultimately, whenever your calorie consumption returns to normal levels, your metabolism is likely to remain at this low level, at least initially. This is part of the reason why people partaking in crash diets tend to put all the weight back on.

You can more or less count on your calorie consumption returning to normal too. After all, another huge flaw in crash diets is that they’re almost impossible to sustain.

The vast majority of people are malnourished while eating too much of the wrong stuff and not enough of the good stuff.

Then, we put them on a ‘calorie restriction’ diet, and they end up eating fewer nutrients.

So, what’s the best way to lose weight while maintaining a fast metabolism? The evidence suggests it’s to do so slowly and naturally with a healthy and nutritious diet.

Is It Good to Have a Fast Metabolism?

A naturally fast metabolism might sound like a blessing from the heavens for people who struggle to keep excess weight off.

Of course, if you’re underweight and struggle to put on fat, it might be viewed as a curse.

A fast metabolism can make it harder to put on muscle and you might find you’re hungry more often than the average person. Other unwanted symptoms include hot flushes, irritability, and needing to poop more.

If you’re wondering how to gain weight fast or how to slow down metabolism, diet is once again the key.

However, it’s still recommended to avoid foods that are too high in sugars or processed fats. These are linked to a number of health problems other than obesity. Instead, try and put on the pounds using complex carbohydrates, healthy fats, and lean meats.

If you’re at a healthy weight, the speed of your metabolism won’t have too much of a bearing on your overall health.

Still, by getting your metabolism in check via these tips in this guide, you’ll put yourself in a great position to reach your ideal weight.