Experience This Free Masterclass by Mindvalley

6 Powerful Mudras To Practice On Your Journey To Enlightenment
Soul

6 Powerful Mudras To Practice On Your Journey To Enlightenment

Surely, you’ve seen it before — a peaceful Buddhist or Hindu statue holding up what may be perceived as a spiritual gang sign. Although to the casual passerby it may seem to be just another statue reppin the zen, the hand sign actually represents something far deeper.

Yogis refer to these hand signs as mudras.

In the stages of yoga, these symbolic body postures appear in many forms (not just the hands) and their mastery is essential to becoming a yogi and reaching enlightenment.

Thankfully, most mudrās are relatively simple to learn.

In this article, we’ve outlined the basic concept of mudrās, as well as some types of mudrās you can practice on your journey to enlightenment: 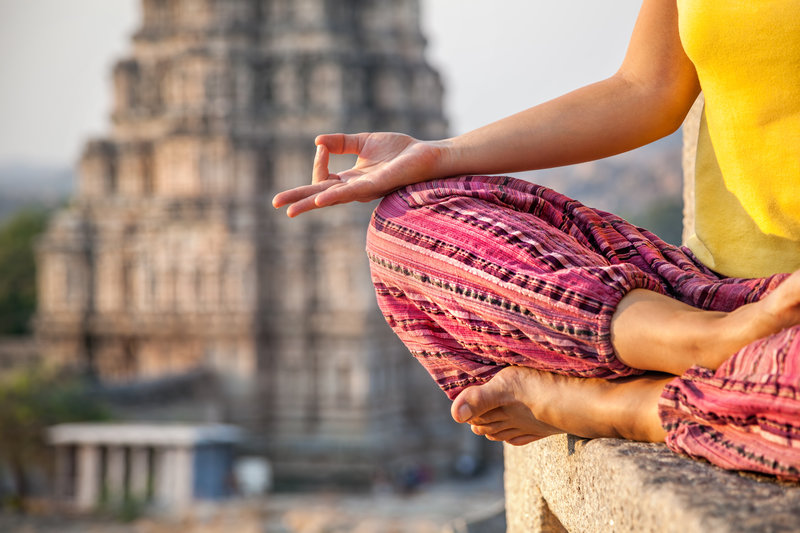 Mudrās are hand gestures (and body positions) applied in many yogic practices. They are used in yoga and meditation to achieve higher states of consciousness. Some say they can even help one attain enlightenment.

You are probably familiar with a few mudrās already. How about the Namaste/prayer gesture with the hands together over the heart? Or the meditative hand position of the joined thumb and index finger (Om)? These gestures are commonly seen, even in Western culture.

Mudras are described in detail in ancient yogic texts and scriptures, such as the Gheranda Samhita, Hatha Yoga Pradipika, and Shiva Samhita.

The integration of mudrās into yoga has given these hand gestures meaning in a deeper context, both symbolically and culturally.

If you're ready for a big shift in your life...you were meant to join this free Masterclass with Vishen.

The Sanskrit mudra definition translates to “gesture” or “seal.” Mudrās are used in the Buddhist and Hindu practice of yoga to create an “energetic seal” within the body. That is, they close (or seal) a circuit of energy existing between two or more points in the body.

Mudrās are ultimately utilized to awaken the divine spiritual power (that is within each of us) and balance energy within the body. Mudras have numerous physical health benefits, and are even used as remedies for physical sickness and disease.

Fun fact — Mudrās are also found in traditional Asian martial arts practices. Many forms of Japanese martial art employ the use of mudrās to focus energy within the body and manifest that energy outside of the body.

How Do Hand Mudras Work?

According to Ayurvedic medicine, our hands hold the endpoints of energetic pathways carrying prana (life force energy) through our body. These energy pathways are called meridians (the same meridians used in acupuncture and reflexology).

Modern medicine has shown that our hands contain hundreds of thousands of nerve endings. These nerves originate in the brain, circulate the body (along with blood vessels), and end as highly sensitive and receptive points in the hands and fingertips.

Our fingers serve as connection points to the 5 elements: fire, air, space/ether, earth, and water.

Hasta mudrās, or “hand mudras,” manipulate the flow of prana by connecting different meridians with different elements. The purpose of hand mudras is to redirect the flow of certain energies from the hands back into the body. 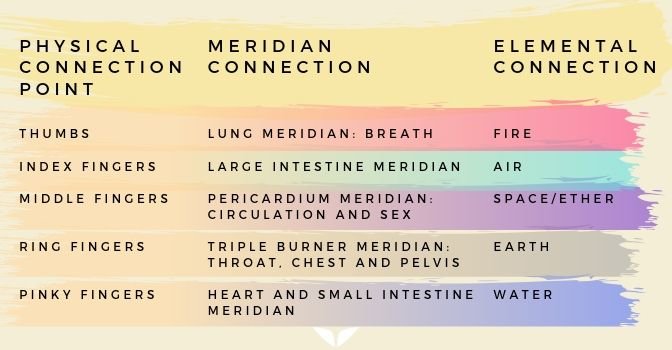 Yes, Mudras do work, but they do not stand alone. They are just a single component of the mind-body experience during meditation.

What’s more, is that mudras are part of communication. For example, take a look at the Kathakali dance. The hand gestures used in this dance send a message to the viewer.

Mudras are also used as a reminder to the practitioner. They help us focus and help remind us why we are meditating in the first place. 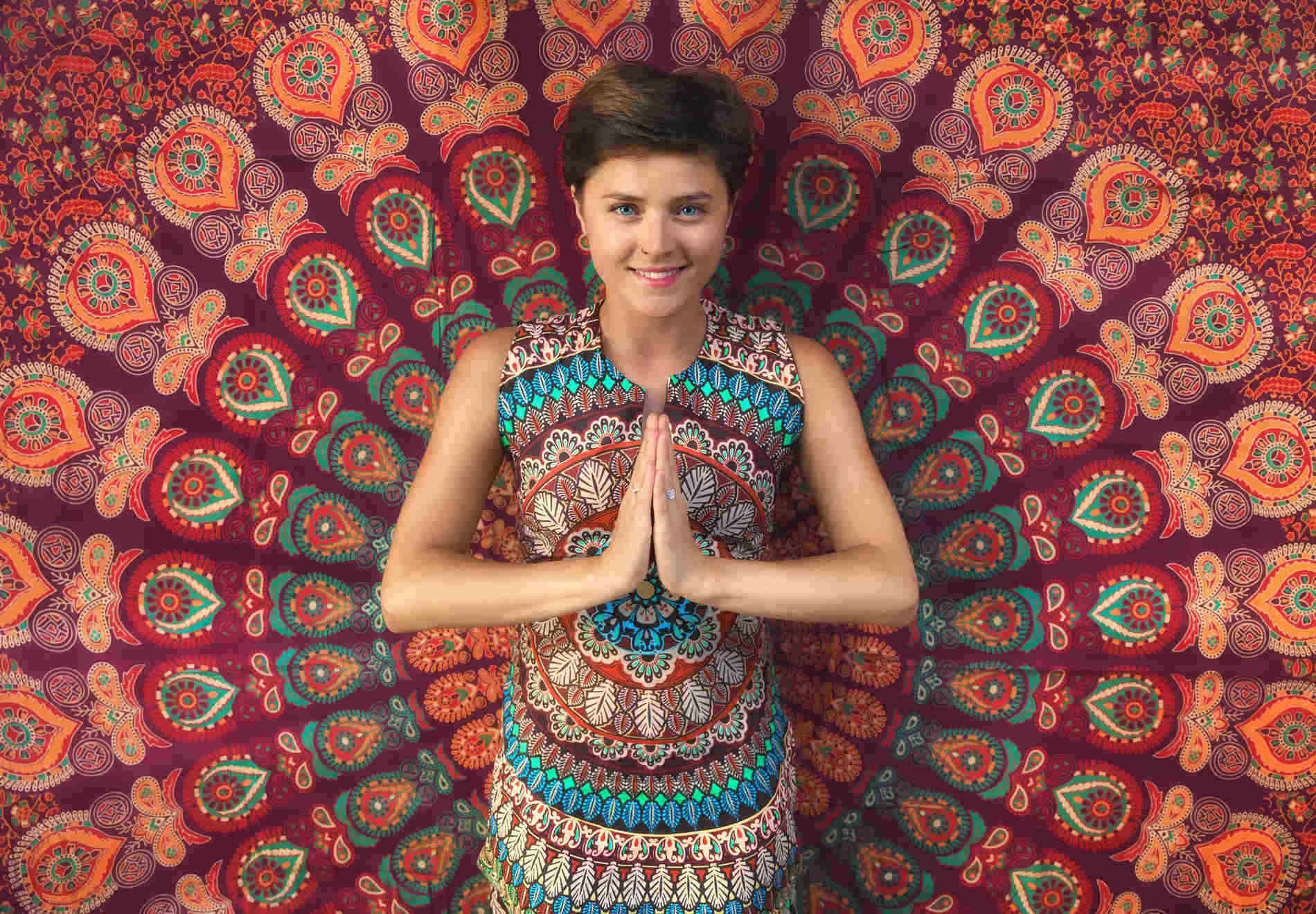 What Are The Mudras In Yoga?

Mudrās are practiced in yoga to encourage balance, intention, and life energy.

While all mudras can be used in yoga, the classical yogic texts place an emphasis on just 20 hand mudras out of the thousands depicted.

Yoga mudras are also used as symbols in statues of the Buddha and of Hindu deities. Typically, statues of Buddhas often depict the mudrā they held during their moment of enlightenment.

Mudras balance energy and create intention. For example, schools in Asia often have statues of Buddha at the entrance of each building holding the Vitarka Mudrā, the mudrā of teaching.

Since the effect of mudras is often subtle and lightly felt, mudras are often practiced in stillness and with breath work (pranayama).

For a visual explanation, explore this beautiful infographic on ‘how to best combine pranayama with mudras’.

You can also use mudras in conjunction with active yoga practices.

To begin directing the flow of prana in the body, a single mudrā should be intentionally held for at least 10 minutes.

Into Personal Growth? You're In Good Company

Make growth and transformation part of who you are. Join us for a free Mindvalley Masterclass to find out how.

One of the most vital elements of practicing mudras is to present and mindful. Practice them with intention.

“Presence is essential for your health. Close your eyes and breathe. You are here.”

Here are the 6 most commonly practiced mudras:

What Are The Types Of Mudras?

The Gyan mudra is used for meditating, integrating wisdom gained while in meditation, bringing awareness to the breath. This yoga mudrā is often paired with deep breathing while focusing on sending the diaphragm as deep into the root chakra with every breath.

The Gyan Mudrā activates the root chakra by directing the flow of prana toward the legs and base. It also stimulates the element air in the body.

Typically sitting cross-legged in the lotus position, place the tips of your index finger and thumb together while keeping your other fingers relaxed and straight.

The direction your palms face varies in different types of yoga — facing your palms upward will help you connect to celestial wisdom while facing them downward will create a grounding effect.

This yoga mudrā is used to purify emotions and thoughts. By practicing this mudra, we can develop greater discipline and determination.

The Shuni Mudrā activates both fire and space.

Perform this mudra by touching the middle finger to the thumb, while keeping the other three fingers straight and relaxed.

This yoga mudrā brings the earth element back into the body. This connection with Earth strengthens our bodies and fosters many healing benefits.

This mudrā helps fight fatigue, pain, and problems with skin and hair (among numerous other ailments, like paralysis and osteoporosis).

While sitting, ideally in the lotus position, place the tips of your thumb and ring finger together while keeping the other fingers straight and relaxed. Keep your palm facing outward, fingers up, and comfortably hold your hand around chest level.

Hold this mudra for 30 minutes or more to activate its full healing effects.

This yoga mudrā is similar to the Prithvi Mudrā in hand position, however, the difference in hand position activates the fire element (thumb) while neutralizing the earth element (ring finger).

The Surya Mudrā is used to improve digestion and metabolism and can help with weight loss. It can also help fight colds by increasing core body temperature (hence, activating the fire element).

Bend your ring finger so that your top knuckle touches the pad of your thumb. Keep your other fingers straight and relaxed.

This yoga mudrā helps us connect to our life force. It awakens the dormant energy contained within us.

The Prana Mudrā is thought to improve mental focus and ease nervousness and fatigue.

Connect the tip of your thumb with both the ring and pinky finger (like making a peace sign). Keep the index and middle finger extended.

The Dhyana Mudra is one of the oldest Mudrās and was used before yogis integrated it into meditation.

This mudrā brings deep contemplation, reflection, and the inner peace associated with the meditative mindstate. Practicing this mudrā will help you improve the ability to focus on meditation.

Place your right hand over your left hand, with just the fingers overlapping. Keep the palms facing up and resting in your lap, while connecting your thumbs together in a triangular shape.

This mudra is used in a number of different meditation postures, including seated, standing, and walking meditations.

For Anyone Searching for the ‘Next Level’ of Self-Mastery...

Do you feel you’re not growing or evolving to your fullest potential?

Is there a particular dream or goal you can’t seem to achieve, despite your best efforts?

Does life leave you feeling like something’s still missing?

Too many people spend their entire lives never truly crossing the gap between where they are and where they want to be.

And so we start believing that only certain people have a mystical power to shape the world according to their thoughts and create opportunities seemingly out of thin air.

But as you’re about to discover, anyone is capable of ascending to this elusive level of self-mastery.

Join Vishen Lakhiani for a FREE 70-minute Masterclass to 'Upgrade Your Self-Identity' making success your default mindset so you can live the life you always wanted to live.