What Is the Cerebellum? Get to Know Your Little Brain
Performance

What Is the Cerebellum? Get to Know Your Little Brain

The cerebellum houses more than half of all neurons of your brain. Yet it takes up only 10% of your brain volume. Discover more about your little brain.

Riding a bike to typing a text message – as simple as these tasks may seem, you can’t perform them unless your muscles are in perfect sync. This coordination of muscle movement is one of the main responsibilities of the cerebellum.

Fun Facts: About the Cerebellum

Located at the back of your brain, the cerebellum closely resembles a cauliflower shape. Its name comes from the same word in Latin, meaning “little brain”.

Although relatively small, the cerebellum houses more than half of all the neurons in the brain.

It is capable of receiving enormous amounts of information from the motor, cognitive, sensory, and language areas of the brain. It is even involved in emotional functions, all of which are situated in the cerebral cortex connected to the cerebellum.

To accommodate for this massive flow of information, its processing mechanics are acting more rapidly than any other part of the brain.

What Is the Cerebellum?

Based on the Merriam-Webster the cerebellum definition goes as follows – a large dorsally projecting part of the brain concerned especially with the coordination of muscles and the maintenance of bodily equilibrium.

It is situated between the brain stem and the back of the cerebrum, and formed in humans of two lateral lobes and a median lobe.

One of the four main regions of the brain, the cerebellum takes up about one-tenth of the total brain volume.

The word cerebellum stands for ‘little brain’ in Latin. It was first used more than 500 years ago by the great Renaissance artist Leonardo da Vinci while creating wax castings of the inside of a  human skull. Because this newly discovered structure looked like a smaller sibling of the brain, he nicknamed it the ‘little brain’.

Because of their similar names, the cerebrum is often confused with the cerebellum. These two brain regions, however, perform vastly different functions.

The cerebellum is in charge of the mechanical processes in the body. The cerebrum controls the thinking behind those processes.

Both are in charge of certain aspects of movement, which is another reason why some people tend to confuse them.

The cerebellum has several key functions. The most notable of them are balancing and coordinating muscle movement.

Other key functions of the cerebellum

In the same way, it detects and corrects errors in your movement, the cerebellum can detect shifts in your body’s balance. It then sends signals to motor neurons which instruct your body to readjust its posture to maintain balance.

The cerebellum also helps your body master movements that involve practice and fine-tuning. This process refers to a wide range of movements – from breathing and walking to riding a bicycle or playing an instrument.

The cerebellum is also important for your vision. It assists in the control of voluntary eye movements and allows for better eye-to-hand coordination. It also plays a part in peripheral vision. 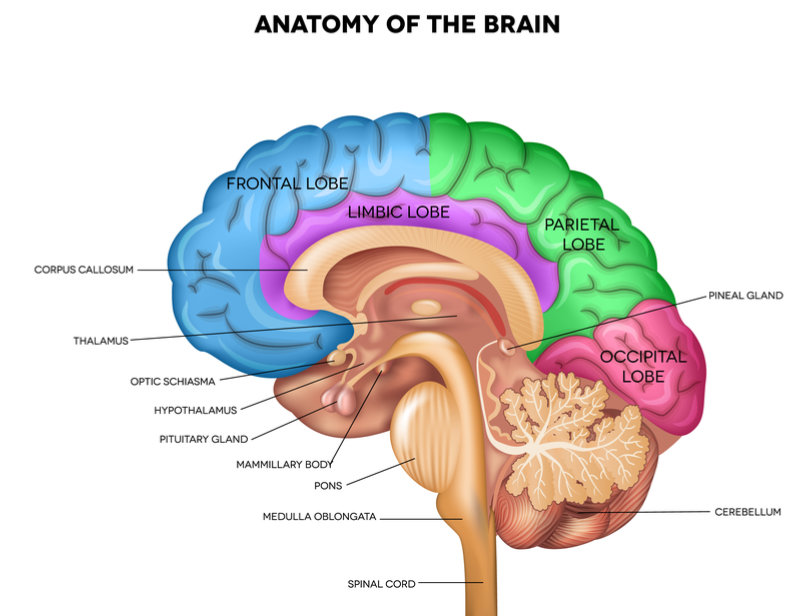 What Does the Cerebellum Do?

First, the signal travels to the cerebellum, instructing the muscles to carry out the movement.

Next, it combines these signals with information from the spinal cord about the current position of the body.

This allows for better coordination and enables your body to move in a fluid and balanced way.

How the cerebellum works: a practical example

Imagine you’re standing in your kitchen and want to grab a jar of honey from the top shelf. The idea itself is born in the cerebrum.

There are, however, several other things that need to take place to turn that idea into action.

Let’s break it down into steps:

Muscle coordination. Body position awareness. Error detection and correction. All these functions are carried out by the cerebellum.

Does the Cerebellum Play a Role in Thinking?

Recent research has challenged the idea of the “non-thinking” cerebellum. A study by the Harvard Medical School demonstrated how the cerebellum fine-tunes our thoughts, just as it does our movements.

This illustrated how it plays a fundamental role in many of our cognitive, emotional, and creative processes.

Symptoms of a damaged cerebellum

On the surface, the cerebellum is primarily in charge of the movement. Damage to that area usually correlates to muscle control-related problems.

Individuals with cerebellar damage tend to sway and stagger when walking.

The most common form of cerebellum disorder is known as ataxia.

Ataxia, the loss of muscle control and coordination, is most often seen as a result of cerebellum-related health problems. It can also be genetic or occur as a result of stroke, head injuries, or cerebral palsy.

Your brain is susceptible to the effects of toxins, and the cerebellum is no exception.

Prolonged exposure to solvents like paint thinners or heavy metals (i.e lead and mercury) can cause ataxia. This also applies to certain prescription drugs and alcohol.

Other symptoms that stem from ataxia

Can You Live Without a Cerebellum?

In theory, living without a cerebellum can cause severe impairment of your motor function along with cognitive and behavioral difficulties. In practice, however, this isn’t always the case.

A 2014 news story revealed that a then-24-year-old Chinese woman went to the doctor complaining about nausea, only to discover that she was one of just nine people in the whole world to have lived without their cerebellum.

This finally helped explain the problems that the woman had faced in early childhood. Namely, she was unable to walk until the age of 7 and her speech was mostly unintelligible until she turned 6. As an adult, however, she experienced no problems that would indicate a physical brain deficiency of any kind.

It turns out that the area of the brain where the cerebellum was supposed to be was instead filled with cerebrospinal fluid. This, in turn, provided cushioning for the brain and protected it against diseases. According to the doctors, this only proves how adaptable the human brain is.

Why Has the Cerebellum Increased in Size?

The size of the human cerebellum, compared to the rest of the brain, has been rapidly increasing in size throughout the span of human evolution, while other parts, like the cerebrum, gradually showed a decrease in size over time.

This showed that it was evident that the cerebellum demonstrated a preferred specialization for contributing to human brain evolution than scientists previously thought.

Also, given its relationship to sensory-motor control and in learning complex movement, this ‘specialization’ is likely to have underpinned the evolution of humans’ advanced technological capacities, which in turn may have been a preadaptation for language.

Some thinking behind such findings concluded that technical intelligence (Inventing and using tools) played an important role as social intelligence in human cognitive evolution.

How Can You Improve the Function of the Cerebellum?

There are many things that you can do to improve the function of your whole brain, including the cerebellum. Because this region of the brain is most involved in physical movement, you need to keep your muscles in optimal shape. The best way to do it is to exercise on a regular basis.

Your brain is like a muscle – it grows stronger with use.

The cerebellum also plays a role in cognition, which is why you need to take steps to increase brain power.

For example, you can take up:

These are only a few we just put out for you. You can learn more about some proven techniques to improve your memory and brain in our blog article, ‘The Ultimate Guide On How To Improve Memory’.