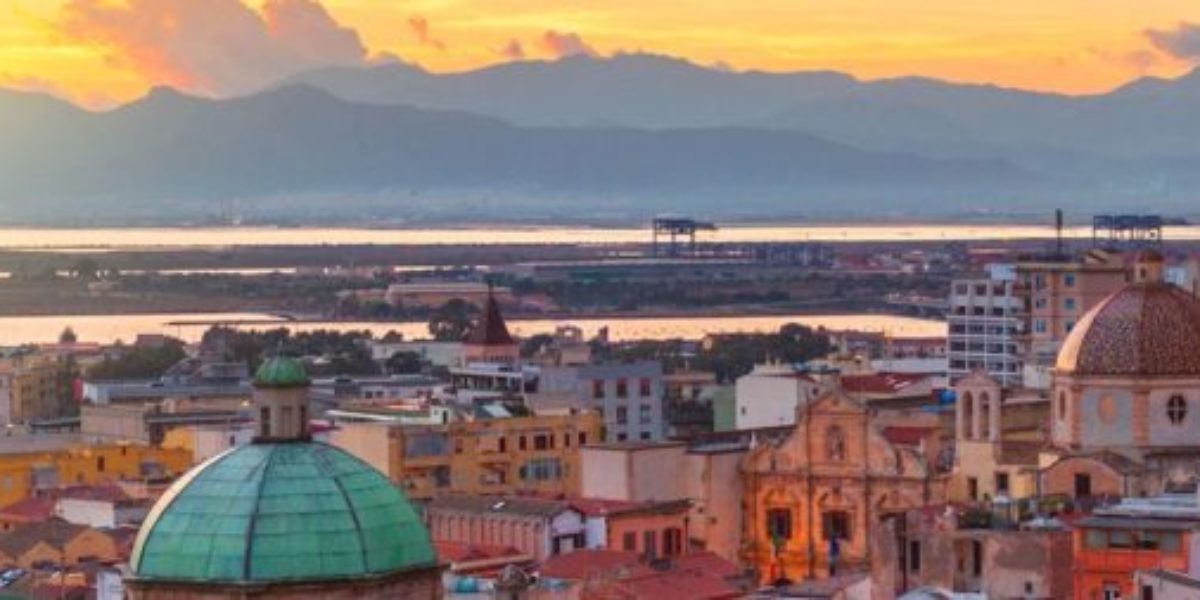 Sardinia is a gorgeous Italian island that lies in the Mediterranean Sea, located just south of the French island, Corsica. It is the second largest island in the Mediterranean and boasts nearly 2,000 kilometers of sprawling coastline, velvety sand beaches, and rugged mountains.

While technically part of Italy, Sardinia also goes by another name — Regione Autonoma della Sardegna, or, the Autonomous Region of Sardinia.

And it’s true — this island has a landscape, culture, history, and energy entirely unto itself. It is famed for its food, its wine, and the baffling longevity its inhabitants enjoy. It is one of only five blue zones of the world, which is why it was our location for A-Fest Longevity.

In short, Sardinia is a Mediterranean paradise. Here are 9 reasons to book your next getaway to the island of Sardinia, Italy.

1. Sardinia is home to some of the most pristine and secluded beaches in the world

Whether it’s scuba diving, snorkeling, swimming, or simply soaking up some rays on the sand, Sardinia’s the perfect place to escape to.

The Maddalena archipelago is a cluster of pink sand granite islands that dot the Strait of Bonifacio on the north-east end of the island. The archipelago is a comprised of seven main islands and sixty-three islets, complete with coves and rock formations that rise from the sea like weathered sculptures.

Here you will find one of Sardinia’s treasures, Arcipelago di La Maddalena National Park, a geomarine national park that protects over three hundred beaches. Many of these beaches are untouched and uninhabited, accessible only by boat.

Or, experience the bewildering beauty of the Golfo di Orosei by booking a boat tour of what locals call “the blue crescent.” So named for the sapphire water that swells against the tiny isolated beaches and grottos that line the gulf, the beaches accessible along the east coast of the island are truly the stuff of tropical daydreams and desktop screensavers.

2. Sardinia has hundreds of coastal trails to trek

Looking for adventure? It’s never far away when you’re in Sardinia.

The Selvaggio Blu, or “the wild blue,” is a seven-day, twenty-five mile hike across the rugged eastern coastline of the island, starting in Santa Maria and finishing in Cala Gonore.

Narrow footpaths, limestone cliffs, and the sprawling sea are your only companions on this remote trail. It has been deemed the most challenging hike in Italy (some argue, in all of Europe), so it’s recommended that you travel in the company of a guide.

This trek is demanding, technical, and not for the faint of heart. But it is, without doubt, one of the most visually stunning adventures available on the island.

For a more family-friendly outing, try one of the deepest canyons in Europe in the Gola di Gorropu, a plummeting gorge surrounded by some of the wildest territory on the island. There are several trails to choose from that range in skill level, but all provide jaw-dropping views of the gorge and its surrounding rock formations.

3. The Sardinian coast is composed of myriads of mysterious grottos

If the seaside grottos of the Golfo di Orosei haven’t satisfied your desire for stalactites, it might be time to pay a visit to one of Sardinia’s most famous seaside caves: Neptune’s Grotto. And while the Roman sea god may have long since abandoned this cliff-side haven (along with the Mediterranean monk seal), it’s little wonder that these sea beings once called this grotto home.

Neptune’s Grotto, located just outside the town of Alghero, is accessible by the 654-step escala del cabirol, or goat’s steps, cut into the 110-metre high Capo Caccia cliffs in 1954. Step within and you’ll find yourself standing on the precipice of a saltwater lake surrounded by stalactites and stalagmites that ooze from the grotto’s walls.

4. Explore the mystical nuraghi of Sardinia

Sardinia is an island with a rich and diverse history, which you’ll know once you spot any one of the nearly 7,000 megalithic stone structures that dot the island’s landscape.

These structures are called nuraghi. They were developed in the Nuragic Age between 1900 and 730 BCE. The nuraghi vary in size and location but share the same basic structure, comprised of an outer tower-like layer, an entrance way, and a round inner chamber — some even have internal staircases.

We don’t actually know the exact purpose of the nuraghi. Archaeologists suggest the structures might have been used as military strongholds, spiritual temples, or everyday dwellings of those that built them.

But one thing remains certain: the nuraghi stand today as a testament to Sardinia’s ancient and perplexing past.

5. Discover the diversity of Sardinia’s wildlife

Have you ever met a flamingo outside your own zoo? Well, in Sardinia, you can spot droves of them in the San Teodoro lagoon.

The island of Sardinia is home to a great number of wondrous creatures, and you’re sure to lay eyes on more than a few during your visit.

The Sardinian wildcat, the marten, and the Sardinian fox traverse the forests of Gennargentu National Park, while the griffon vulture, the golden eagle, and the peregrine falcon soar high above the Gennargentu Mountains.

Along the coast you’ll find the Mediterranean monk seal, the fin whale, the sperm whale, dolphins, and of course, pink flamingos.

If you’re lucky, you may even catch sight of the wild Giara horse on the basalt plateau of La Giara di Gesturi — a rare equine breed native to the island of Sardinia.

6. Learn about Sardinian longevity in one of the world’s five blue zones

The island of Sardinia is part of a pretty exclusive club — it’s one of the five blue zones of the world —regions of the world whose inhabitants enjoy record-breaking longevity.

Dan Buettner coined the phrase in the November 2005 National Geographic story, “The Secrets of a Long Life.” He identified five distinct geographic areas that statistically enjoy the healthiest, longest lives in the world. These areas are: Sardinia, Italy; Okinawa, Japan; Nicoya, Costa Rica; Icaria, Greece, and the Seventh-day Adventists in Loma Linda, California.

So, what are the people of Sardinia doing to lead such healthy lives? There’s a lot we can learn about longevity from the inhabitants of the island.

In his novel, The Blue Zones: Lessons for Living Longer from the People Who’ve Lived the Longest, Buettner identifies nine lifestyle commonalities shared by those who live in the blue zones:

7. Enjoy the unique cuisine of the island

Sardinian cuisine is a blend of the rich, the savory, the sweet, and the fresh-from-the-ocean salt that can only be found on the island, prepared for you by the skilled and knowing hands of Sardinian locals.

One of the island’s traditional breads is pane carasau, a thin, circular flatbread often served with extra-virgin olive oil and salt. Soak it in lamb stock and top it with tomato paste, pecorino cheese and a coddled egg and you’ve got pane frattau.

You’ll find no shortage of cured meats, including pancetta, prosciutto, lonza, and salsiccia sarda, a type of Sardinian sausage that combines pork seasoned with fennel, anise, and pepper.

Since Sardinia is an island, you’re likely to discover strange and enticing seafood at every turn, with lobster, sea urchin, and octopus being a few specialties.

And what Italian cuisine would be complete without pasta? Fregula is what Sardinia is famous for—a pasta made of semolina rolled into small balls. It’s often served alongside seafood.

Sardinia is home to many wine varietals, including Vermentino di Gallura, Torbato, and Malvasia di Bosa.

But many claim that one of the secrets to Sardinia’s blue zone status is the consumption of the locally-produced red Cannonau wine. Cannonau is grown across the island, from the grape varietal, Grenache.

Sardinians consume this wine on a daily basis, enjoying two to three small glasses with lunch and dinner. Many Sardinians live well into their 90s, and the island has almost ten times more centenarians per capita than the United States.

Could the Sardinian Cannonau wine have something to do with it? It certainly doesn’t hurt to give it a try!

Mindvalley’s signature A-Fest event takes place at a brand new stunning and exotic location across the globe every year. From Ibiza to Cancun to Maui, A-Fest seeks to connect visionaries, entrepreneurs, artists, and change-makers from around the world at one intimate, life-changing event.

There’s a reason this event is by invitation only. But you can most certainly put your name in the hat! Apply to Mindvalley’s next A-Fest here.

The event has been described as mind-altering and paradigm-shifting. Joining in at Mindvalley’s A-Fest means stepping into the embrace of a tribe. You’ll meet lifelong connections, foster new ways of thinking and being, and participate in the adventure of a lifetime.

A-Fest is a once-in-a-lifetime experience. Here’s just a taste of what the event holds in store:

What would you like to see or do in Sardinia most? Tell us about it in the comments below!