Authoritarian Vs Authoritative – Which Is Better? [Infographic]

When your child refuses to eat, do you force them to sit at the table? Or do you prepare a wider range of food for your child to choose from?

Depending on your response, you could be either an authoritarian or authoritative parent.

And when it comes to authoritarian vs authoritative parenting styles, the differences are actually quite pronounced.

But what are the differences between the two? How can you distinguish one from the other? What are these parenting styles all about? And which styles do researchers agree is best?

In this article, we’re going to explore everything you need to know about these parenting styles.

What Are The Types Of Parenting Styles?

The four types of parenting styles are:

For the sake of this article, though, we’ll examine the first two parenting techniques. 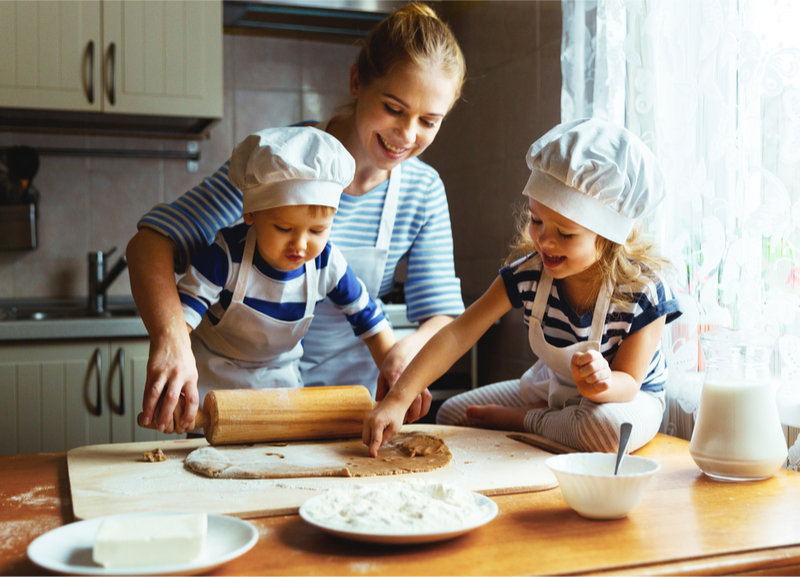 While both have a high level of demandingness, their differing levels of responsiveness are what truly separates them from each other.

This parenting style relies on fear. They believe children must be obedient and do only what they’re told.

In this type of household, the rules are the holy grail that holds everything in order. And if those rules are broken? Well, the child will be punished.

When children demand an explanation, the parent often replies, “because I said so.”

For example, if you are an authoritarian parent, you would tell, not ask. Your approach is strictly “Do as I say or else.” There’s no room for negotiations and if there’s resistance from your child, punishment usually ensues.

The authoritarian parent doesn’t like to see the same mistakes repeated and are very clear when setting non-negotiable rules and boundaries — often without considering the children’s needs.

Studies have shown that authoritarian parents are likely to have children who are:

In fact, they tend to have the lowest self-esteem among children of different parenting styles.

The authoritative parent, on the other hand, makes rules while taking the child’s wishes into consideration.

This parenting style demands a lot from both parties. Parents offer emotional encouragement when something is done right. But if the child doesn’t behave well, they will be disciplined to learn a lesson.

For example, if your child is angry, you, as the authoritative parent, will approach them with love and care, while remaining calm and deliberate. You don’t respond with anger or frustration, but you execute your boundaries and help your child handle his emotions through words and reasoning.

In this way, authoritative parents make sure that the child isn’t just obedient, but that they also learn from their mistakes.

Which Parenting Style Is The Best?

Comparing the differences between difference between authoritative and authoritarian parenting styles, which one is the most effective in raising healthy and well-rounded children?

A number of studies have shown that the authoritative parenting style is the most effective:

Why Are Children Of Authoritative Parents More Successful?

The secret lies in maintaining the balance between discipline and nurture.

Authoritative parents use positive discipline that allows their children to think logically about how their behaviors affect others. But at the same time, they listen to their child’s needs and support them when necessary.

Authoritative parents give encouragement and compliments when their child demonstrates good behavior.

As for bad behaviors, they use positive discipline to teach their children a lesson. For example: “Because you didn’t clean your room in time, we’re going to miss the show. This is what will happen when you procrastinate.“

The sweet spot of authoritative parenting is the dance between strictness and flexibility.

So, you want to set clear rules, but at the same time, be flexible enough to alter the rules according to your child’s needs.

When your child expresses dissatisfaction with a rule, you meet them where they are by acknowledging their emotions and actively listening.

The New Paradigm Of Parenting

Studies have shown that the authoritative parenting style is sufficient in raising competent children. But is there anything better when it comes to raising successful children in this modern, complex, fast-paced world?

It’s no longer authoritative vs authoritarian styles. It’s now about conscious parenting, which is a revolutionary parenting style that helps raise unique, confident, and independent children.

These children are not forced to fit into the expectations defined by society. Instead, they are encouraged to explore and develop the true nature of their beings.

This approach is focusing on creating ideal environments for children to cultivate their innate wisdom, and equip them with tools to not just survive but thrive in this ever-complex world.

How much are you aware of the way you parent?

Conscious parents are aware that they’re projecting their unmet needs onto the child. They believe their children don’t belong to them. Instead, the child is an independent individual with their own innate wisdom and a unique life journey.

Conscious parents show up and emphasize only one thing: connection with their children.

This new paradigm of parenting emphasizes, not control and correction, but guidance and acceptance, which allows children’s innate intelligence to emerge and build long-lasting connections.

So, what do you think authoritarian vs authoritative parenting? Share your thoughts in the comments below.

Let’s Be Bad(Ass) Moms: 5 Ways To Put Yourself First

A How-To Guide For Parenting In The Pandemic | Dr. Shefali Tsabary

How To Elevate Into Advanced Teens