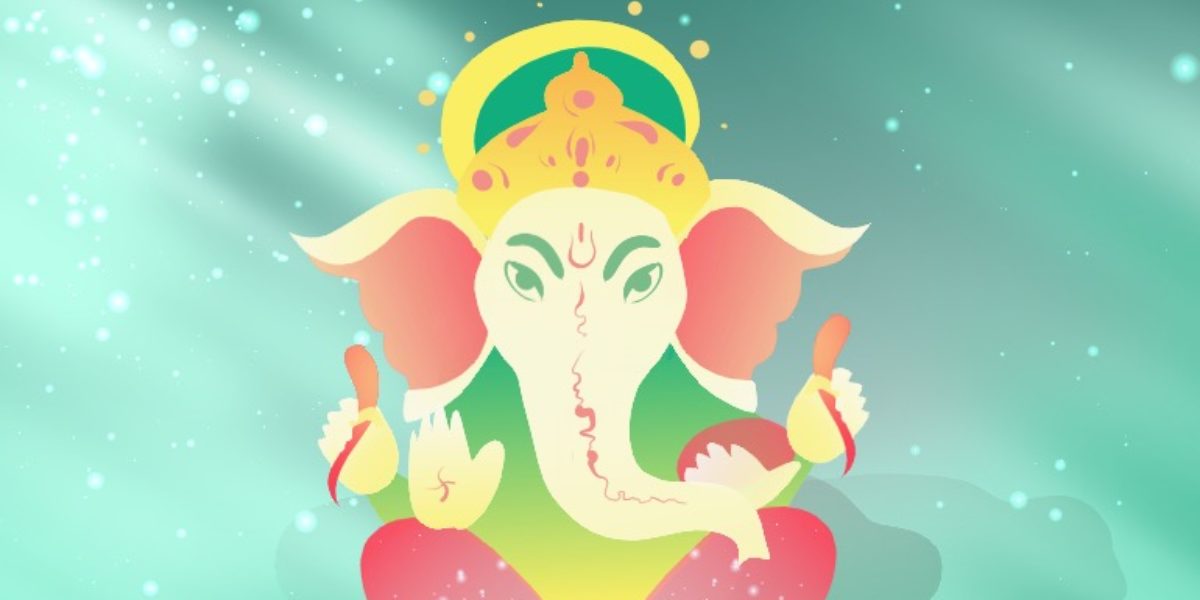 The Ganesh Mantra is best known for its ability to remove obstacles from our psychological and spiritual lives.

It may not be the most widespread mantra out there, but like others of its kind, it is powerful. And with practice, you will notice its potent benefits.

Who Is Lord Ganesh?

Ganesh is the son of the God Shiva and the Goddess Parvathi, and the brother of Kartikeya. Parvathi gave birth to Ganesh when she made him out of pieces of clay from her own body.

He is described as having a human body and the head of an elephant, with only one tusk. Although the number of limbs he has varies according to lore, he is typically depicted with four arms, in which he carries a goad and a noose.

He is drawn with a big, round belly – perhaps because he carries a bowl of dumplings!

Although there are many tales of how Ganesh lost his tusk, the favorite is that while guarding his sleeping parents; Parashurama, disgruntled with Ganesh for being denied entry to Mount Kailash, engaged him in battle.

Although Ganesh fought valiantly and was set for victory, Parashurama threw his ax at Ganesh’s head, thereby severing his tusk. Ganesh took the hit without resistance because the ax was a gift from Shiva.

Ganesh is the embodiment of spirituality, wisdom and prosperity.
He protects beauty, grace and compassion.

The 6 Benefits Of The Ganesh Mantra

1) This mantra is known to activate the mind and various chakras of the body. This leads to better blood circulation and improved metabolic rate.

2) It’s said that it’s best to chant the Ganesh Mantra before undertaking a new venture, as he the bringer of success, prosperity, and good luck.

3) Chanting the Ganesh Mantra also brings peace, as it removes all enemies from one’s path.

5) It brings clarity into our lives.

6) It’s said that if you chant the Ganesh Mantra 1008 times, all fear will be removed from your heart.

When should you use the Ganesh Mantra?

To make the best use of the Ganesh Mantra, use it when you’re ready for a new beginning.

This could be a business deal, a new job, a new relationship, or even the start of a new personal project.

There are no set rules on when to chant the Ganesh Mantra, but you can use it to summon luck, happiness, beauty, and success into your life.

It is most powerful when used to remove negativity and fear from your mind.

How To Chant The Ganesh Mantra

The Ganesh Mantra is chanted as:

From Sanskrit, the Ganesh Mantra is commonly translated as:

“Lord Ganesh, son of Lord Shiva, remover of obstacles who guards the doorway to the enlightened realms. His blessings are essential for good beginnings.”

As with any form of meditation, it’s best to chant this mantra when you are alone, in a quiet area where you will not be disturbed. Make sure you’re comfortable. And it’s best to do it consistently, so make a ritual out of it if you can.

This mantra is most beneficial if you can practice it daily for at least 40 days.

Examples of the Ganesh Mantra

If you don’t know how to chant this mantra, here are two example videos for you to follow during your meditation.

To start off the day:

We hope this guide has supported you in understanding the power of Mantra-use and how they can be used to remove obstacles from our psychological and spiritual lives.

Chanting mantras daily is enough to kickstart a deeply spiritual journey within us, a journey that is exciting, but one that can seem a little scary at first.

At Mindvalley we know that personal growth of any kind can sometimes feel daunting, especially if you’re growing and transforming alone without the support of those around you. And when it comes to your spirituality, it can feel even more isolating! Spirituality is all about embracing the challenge to go within ourselves for the answers we seek, so it’s often a solo trip.