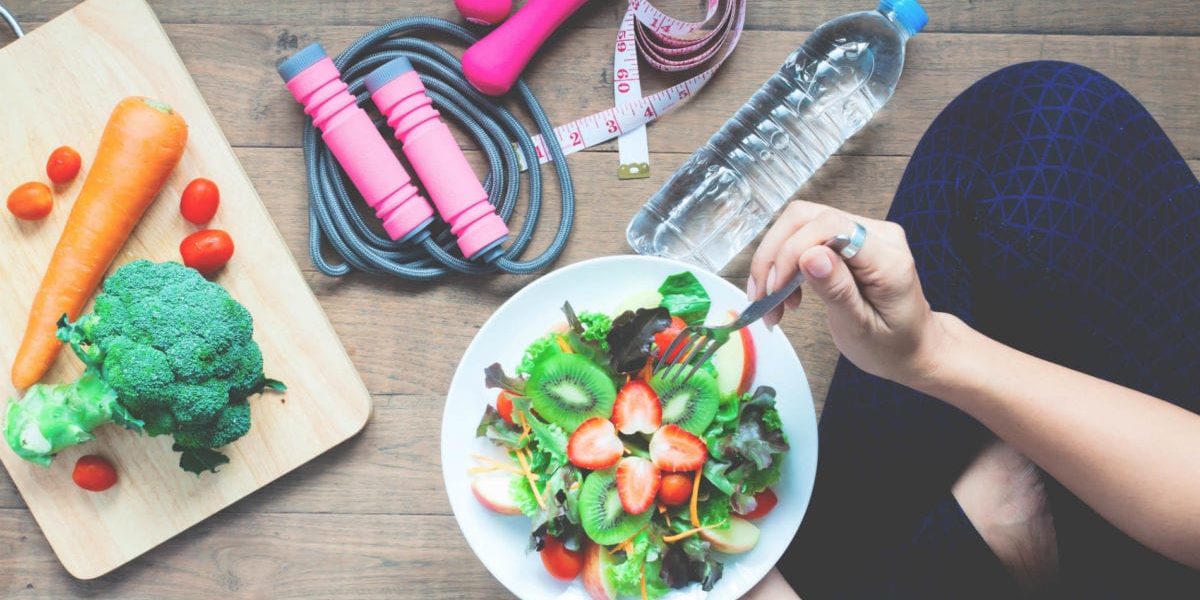 Part Of Being A Yogi Is Eating Like A Yogi.

Yogi food plays a big role in our practice, not only because diet so profoundly impacts health and our ability to do yoga, but because food affects the mind. A diet which is too stimulating or too dulling in nature can actually hinder our yoga practice and evolution.

Yogi food plays a big role in our practice; not only because diet so profoundly impacts health and our ability to do yoga, but because food affects the mind.

A diet which is too stimulating or too dulling in nature can actually hinder our yoga practice and evolution. The best yogi food is sattvic; that which elevates the mind to a peaceful and calm state. 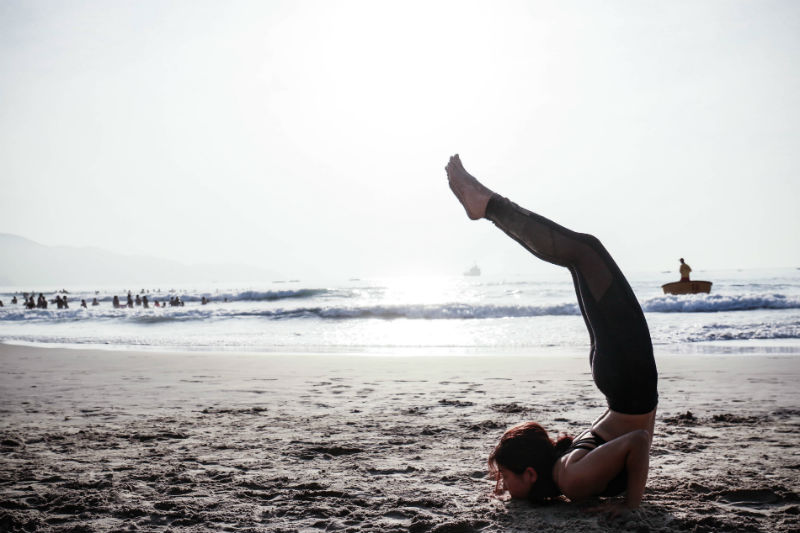 In order to understand what an elevating yogi diet actually is, we first have to understand the three gunas. These are the most subtle qualities of nature that underlie all aspects of life, the mind, and existence. The gunas are omnipresent and determine our spiritual growth.

Both yoga and ayurveda use the three gunas as a basis for understanding behavior, lifestyle, diet, and even herbs. This spiritual categorization helps us to choose what elevates our consciousness rather than what keeps us in a state of agitation or ignorance.

Sattva is the guna of intelligence, virtue, and goodness. It is the highest of all three gunas. The principle of peace, sattva gives contentment, balance, stability, happiness, and clarity.

Sattva has an inward and upward motion, bringing about the upliftment and evolution of the soul. Sattva gives us curiousity and fascination with life. It’s what drives us to learn and to look inside ourselves to improve.

While we do need a little bit of the other two gunas (rajas and tamas), it is sattva that we should generally aim toward embodying.

Rajas is the quality of activity and turbulence. It’s the forward and outward moving guna–the one which drives us toward action and goal-setting. In a positive sense, rajas gives us initiative and the ability to organize.

But when we are overtaken by rajas we become seekers of power. We look for materialistic end goals that do not provide happiness. The result is pain and suffering. Too much rajas causes over-stimulation and fragmentation.

Tamas brings ignorance as it clouds and veils our consciousness. It causes us to make choices that keep us on a lower level of awareness, as opposed to sattva, which elevates. Tamas is heavy and retards things; hindering growth.

The 3 Gunas and Food

Food most definitely has an influence on the gunas within. It first and foremost nourishes the physical body, and secondarily nourishes the mind and consciousness.

Whether aware of the guna philosophy or not, we have all experienced the gunas of food. A deep-fried funnel cake, for example, makes us feel heavy and sickly. A steamy bowl of organic vegetable soup, on the other hand, uplifts us and makes us feel deeply nourished. It is sattvic. The funnel cake is under the influence of tamas, while the soup is under the influence of sattva.

Diet affects our psychology. It’s used as a tool in ayurveda to rebalance not only the physical body but the mind as well. Depression, for example, would be treated not only with lifestyle and herbs, but with foods filled with prana. The prana of food increases prana in the body, helping to overcome depression and lethargy. A diet for depression might even include some rajasic food to take the mind from a tamasic state to one of action, and then ultimately to one of peace.

Yogi food is sattvic in nature. It promotes growth in all forms: a healthy physical body, as it is wholesome and nourishing; a calm and peaceful mind; and a commitment to the betterment of the spirit. Yogis should aim to have a predominantly sattvic diet. While some rajasic food is ok here and there, tamasic food should be avoided. 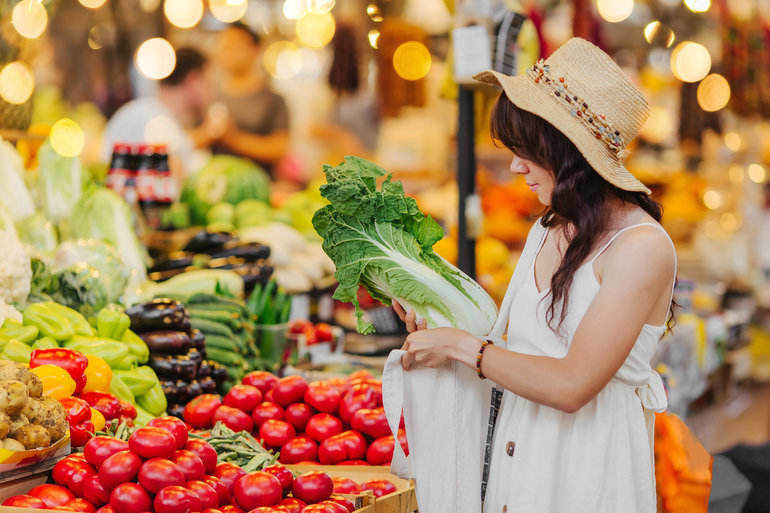 Sattvic food is real food. It includes whole grains, vegetables, fruits, nuts, seeds, milk, and ghee. It also includes all six tastes (a philosophy unique to ayurveda): sweet, sour, salty, pungent, astringent, and bitter. The balance of all six tastes is sattvic in nature. To eat a diet which too heavily influences only one taste would imbalance the body.

Sattvic food is as close to nature as possible. It’s devoid of chemicals and additives. It’s freshly cooked rather than canned or frozen.

Along with the breath, food is the main source of prana: the vital life force. Foods which are freshly picked are full of prana. Prana is unquantifiable. A canned pear may have the same vitamin content as a sun-ripened pear, but it lacks prana and life. The sun-ripened pear is therefore sattvic in nature, and the canned pear is tamasic.

That being said, most fresh fruits and vegetables are sattvic in nature. They’re all the more sattvic if they’re in season and locally grown. 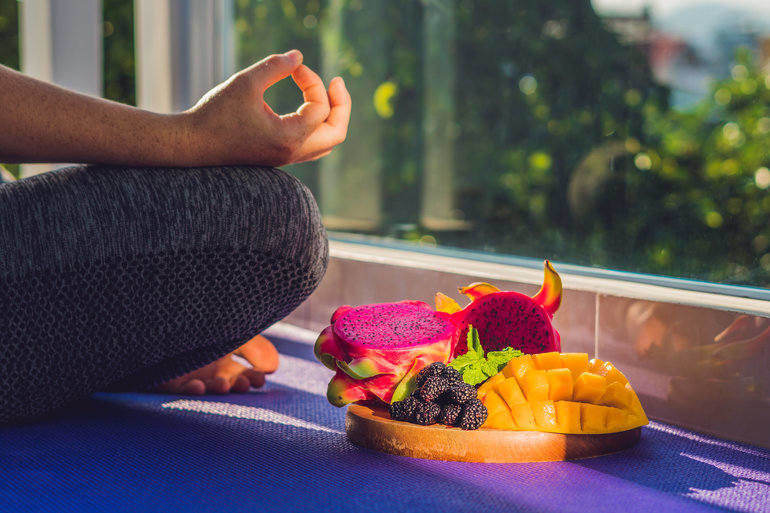 Milk and ghee can have a very sattvic effect on the mind. They’re a traditional part of the yogi diet as they’re nourishing to the body tissues and brain.

However, not all milk and ghee are sattvic. Gone are the days of getting our milk directly from happy, grass-fed cows. Cows which have not been raised humanely or fed their natural diet will not produce milk or ghee which is sattvic. Their own stress and anguish is energetically transferred to the products they provide. Thus, dairy should be chosen wisely from grass-fed, open pasture cows.

The sattvic diet is not only what we eat but how we eat. Eating too much of a good thing will eventually become tamasic in nature and make us feel dull. Eating not enough is rajasic in nature as our mind and body won’t be grounded.

Yogis should eat food in the proper quantity: not too much, not too little. Ayurveda recommends filling the stomach half full with food, a quarter full with liquids, and leaving a quarter empty for digestive action. If we’re used to overeating, this habit can take time to embrace. It helps to take several deep breaths before each meal to tune in with the body. Through this practice we become more sensitive to sensations of fullness.

Ayurveda recommends filling the stomach half full with food, a quarter full with liquids, and leaving a quarter empty for digestive action. If we’re used to overeating, this habit can take time to embrace. It helps to take several deep breaths before each meal to tune in with the body. Through this practice, we become more sensitive to sensations of fullness.

Eating in a peaceful atmosphere is also a sattvic practice. If we’re chowing down on organic vegetable soup while we stressfully hammer away at work, our energy is diverted away from digestion and toward the work at hand. We also eat faster and more, unaware the sensations of fullness. Again, sattvic food becomes tamasic. Choosing a quiet and settled atmosphere is an important practice for yogis.

We should also take into consideration who cooked our food. It’s impossible to know in restaurants what mental state the chef is in. If they’re angry or having a bad day, their negative energy is transmitted into the food they cook. It’s best to cook our own food for this reason. If we do eat in restaurants we should use some discrimination — avoiding fast-food and instead choosing restaurants with good energy and chefs who take pride in their work.

Rajasic food puts the mind in a rajasic state: unsettled and agitated. It’s stimulating by nature. It includes food which is very hot, spicy, sour, or salty.

Yogis traditionally avoid onions and garlic because they’re stimulating by nature. Other rajasic foods are chilies, pickles, vinegar, very salty food, mayonnaise, and sour cream. Caffeinated beverages like coffee and black tea are stimulating and considered rajasic. Some schools of thought consider alcohol rajasic while some consider it tamasic, as it first agitates and then eventually dulls the mind.

Besides their stimulating effect on the mind, rajasic foods vitiate the blood, promote high blood pressure, and cause irritability. In ayurvedic terms, these are generally pitta-aggravating foods.

Eating in a hurried, agitated atmosphere is rajasic by nature. Again it’s not just what we eat, but how we eat that affects the gunas.

Tamasic food is dulling by nature. It lacks prana and is essentially “dead.” Tamasic foods are greasy, deep-fried, heavy, artificial, stale, or rancid. Canned and frozen foods are also tamasic as they lack life force. Even leftovers are tamasic, as the prana in food dissipates after it’s been cooked. It’s often the way in which these foods are prepared and stored rather than the food itself which makes them tamasic.

However, a few foods are considered tamasic by nature: mushrooms, which have a dulling effect on the mind, and meat. The yogi diet is traditionally vegetarian as one of the main principles of yoga is non-violence. Yogis always aim to inflict the least amount of harm to other beings as they believe that all life has consciousness.

Meat dulls the mind and keeps it on a lower level of awareness. It’s also heavy to digest, making it tamasic in two forms. For yogis who do choose to eat meat, it’s vital to choose the source wisely. Make informed decisions, knowing where the animal comes from, how it was raised, and what it was fed. Offer gratitude to the animal before the meal to offset some of its tamasic effect.

A tamasic diet tends to clog the channels of the body. It causes lethargy, heaviness, excess sleep, apathy, and hypoactivity. Overeating sugar-laden desserts for example, will cause us to feel heavy and weighed down; a very tamasic effect.

Becoming aware of the existence of the gunas is the first step toward embracing a yogi diet. Once we understand these principles, we can apply them to the foods we buy, the way we cook, and the way we eat. While we do feel an immediate upliftment, the sattvic diet permeates deep into our subconscious over time. Our yoga practice benefits as our consciousness increases.

How do you prepare your body for your yoga flow? Share your secrets with us in a comment!