The Real Secret to Building a Successful Business (It’s Not What You Think!)

Strategy is seen as the “holy grail” of business – you just need the right one and you’ll succeed. It’s a simple concept and it seems like a great approach except for one thing…

We all know the key to building a successful business is making the right decisions.

But how do you actually do that?

Trusting your gut or intuition is a reliable method to make great decisions.

Professor Marius Usher of Tel Aviv University’s School of Psychological Sciences had his researchers flash a sequence of pairs of numbers on a screen. The numbers represented profits on the stock market.

Number pairs on the right of the screen were categorized into one group and pairs on the left were in another. Study participants were asked to watch the numbers on both sides of the screen and then pick the most profitable group.

This doesn’t seem like a big deal until you learn that the sequence of numbers in each group was flashed extremely quickly – a few pairs per second. There was simply no way to calculate the numbers, therefore people had to make choices based on their gut.

The results were astounding.

Participants accurately picked the most profitable group of numbers up to 90% of the time.

“Intuitively, the human brain has the capacity to take in many pieces of information and decide on an overall value.
Gut reactions can be trusted to make a quality decision.”

At key moments, many of the most successful Founders, CEOs and entrepreneurs tossed out strategy and made decisions that – at first glance – seemed crazy.

Decisions that made no “logical” sense.

Decisions that were made on gut instinct.

He killed 70% of Apple’s products back in 1997 when the company was on the brink of bankruptcy.

Everyone thought he was crazy but history shows that Jobs’ decision turned Apple around – the company went from bankruptcy to an outrageous trillion-dollar success story.

We pulled a Steve Jobs move at Mindvalley when we killed 70% of the courses and programs we offered and held on to a handful that were the right fit for the company and for our tribe.

Way back in 1914, Henry Ford did something that made people think he’d lost his mind – he doubled his employees’ salaries.

Everyone waited for The Ford Motor Company to go bust.

Instead, Ford doubled productivity, reduced employee turnover by a significant amount and increased demand for their cars because the workers themselves could now afford to buy the cars they made.

The best of the best transform subtle gut instinct into solid, reliable business results with 3 keys…

They work with the power of questions, insights, and perspective.

When Jobs drastically cut back on Apple’s product line, he instinctively knew that it had to be done but he didn’t take action, randomly.

Jobs’ was guided by a single profound question that sparked powerful insight and clear perspective.

His question: Who is Apple and where do we fit in this world?

Jobs’ ability to tune into his gut instinct and work with questions, insights, and perspective showed him which products to keep and which ones to slash.

This led to great things for Apple and for the world.

The 3 keys will give you clarity not just on what to do but also what not to do.

Ever heard of Virgin Cola? Chances are you haven’t.

That’s because Richard Branson’s attempt to take over the soda market back in the early 90s was a massive failure.

Branson said that after the Virgin Cola fiasco, he’s learned to ask himself whether a business idea is different enough from the market leaders.

Branson’s reflective question shifts his perspective. It gives him insight and clarity on the business ideas he should dive into and the ones he should ditch.

Apple had Steve Jobs. The Virgin Group has Richard Branson.

Your business has you.

It’s about knowing how to make the right decisions at the right time.

Getting clarity on your next steps with the power of insights and perspective.

It’s not about applying some random strategy because everyone else is doing it.

So, the next time you’re tempted to “follow the crowd” and implement the latest “greatest” business strategy…

Use your instincts, ask questions, and stay open to new insights and perspectives.

And just like the world’s legendary entrepreneurs who create their own unique path to success, you just might end up changing the world.

What are your experiences with following your gut feeling? Tell us in the comments below! 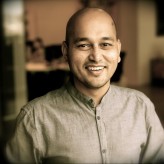 Ajit Nawalkha is the Co-founder of Mindvalley Teach and CEO of Evercoach. He is passionate about disrupting industries and creating positive change. Ajit is a business coach himself.