Understanding The Cerebellum: Definition And Function

The cerebellum is the part of the brain that’s in charge of coordination and movement.

Whether you’re trying to solve a jigsaw puzzle, get a basketball through the hoop, or make a left turn while driving, it’s your cerebellum that enables you to perform all these tasks.

Despite taking up just one-tenth of your brain’s total volume, the cerebellum houses more neurons than all other parts of your brain combined.

In this article, we will explain the cerebellum definition and look into the main functions of this vital brain region by answering the following questions:

What Is The Cerebellum?

Before we get into details, let’s first start with the basics,

The cerebellum: a definition

The cerebellum is a ball of nervous tissue located under the rear end of the cerebrum.

Positioned in the back of the head, the cerebellum is connected to the brain stem by bundles of nerve fibers that help transmit information across the brain.

What Does Cerebellar Mean?

Another definition for cerebellum (cerebellar in its adjective form) comes from Latin roots meaning “little brain“. 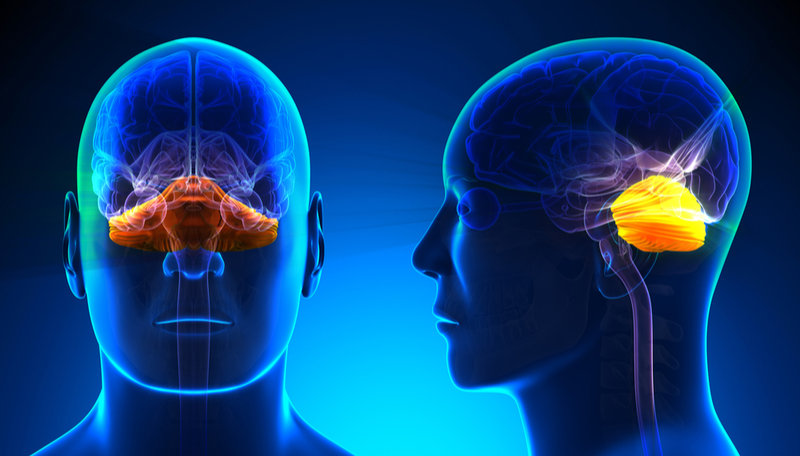 What Does The Cerebellum Affect?

The cerebellum affects many processes, but it is most commonly associated with three: movement, coordination, and balance.

Every voluntary movement that you make originates in the cerebrum, but it’s the cerebellum that puts everything into action.

For example, let’s say that you want to move your finger.

A corresponding signal will instantly form in the motor cortex of your cerebrum and travel to the cerebellum. The cerebellum will then send a direct instruction to the muscles in your finger to carry out your planned movement.

Now let’s say that you want to cross the street.

Walking is a complex process that requires several muscle groups to move simultaneously. As such, not only will the cerebellum have to instruct all individual muscles to move according to your plans, but it will also have to coordinate their movement.

Once again, the process starts as a signal in the cerebrum and travels to the cerebellum. From there, it is the job of the cerebellum to instruct all the necessary muscles involved in walking to move in sync.

To make this possible, this region of the brain is equipped with numerous sensors that can detect shifts in movement and balance. Using the information provided by these sensors, the cerebellum sends signals to the rest of your body to adjust the balance as you move.

What Helps The Cerebellum Perform Its Function?

The brain stem connects the cerebellum to the cerebrum and helps fine-tune its functions.

First, the signals sent out by the cerebellum travel through the cerebellar peduncles into the brain stem. From there, these signals are relayed to parts of the cerebrum that is in charge of motor control.

This supports coordination and helps your body to carry out complex movements like walking or running.

Why Has The Cerebellum Increased In Size?

The cerebellum, in comparison to the rest of the brain, has been gradually increasing in size over the span of our evolution. However, there is no definitive answer as to why this increase in size occurred over the years.

Playing a major role in the development our cognitive functions (motor skills, spatial skills, and learning), It is assumed that increase in size of the cerebellum contributed to evolving today’s human cognitive abilities to the level they are today.

Can You Live Without Your Cerebellum?

A study published in 2015 revealed that it is possible to live a normal life without a cerebellum.

The authors observed a 24-year-old `woman who discovered that she was born without a cerebellum while visiting her doctor for a routine checkup. Although the absence of a cerebellum may have been responsible for slower speech and movement development in childhood, it caused no noticeable problems in adulthood.

This is a very rare phenomenon, though. In 2004 when this woman first discovered that she had no cerebellum, there were only eight other people in the world with the same deficiency.

Drawing, knitting, or playing an instrument – these are all excellent ways to exercise your fine motor skills. Not only that but they are also some of the best techniques to supercharge your brain and improve your memory.

What are your favorite brain-boosting techniques? Let us know in the comments below.